It's the size of your heart, not your church

Watch a video about Unity Baptist Church and its embrace of a people group in the Sahara:
http://www.imb.org/main/downloads/flashvideos.asp?mvid=13449&mvidext=mp4

Chris Jenkins wants fellow pastors to know something up front: It’s not easy to get your church strategically involved in global missions.

In fact, it might be the hardest thing you ever do.

“I hear the International Mission Board giving us these steps, you do this and you do that, and it sounds easy,” says Jenkins, pastor of Unity Baptist Church, a congregation of about 200 people in semi-rural Prince George, Va. Four years ago, the church called IMB’s prayer office and committed to pray for a nomadic group in the Sahara Desert with more than 300,000 people and only one known Christian.

“We wanted somebody that nobody else wanted,” Jenkins told messengers to the annual Southern Baptist Convention meeting in New Orleans during IMB’s convention presentation June 19. “Of course, we just wanted to pray for them and didn’t have a clue what we were getting into.”

They were getting into something that is revolutionizing their church — and might just revolutionize the people group they began visiting in 2010. But that’s getting ahead of the story. Jenkins insists he’s like most pastors: so busy he can barely carve out enough time to handle garden-variety ministry and family life — much less a major commitment to an unknown group thousands of miles away.

“When you’re dealing with a couple hundred people in your congregation and they all have a different idea of what you’re supposed to be doing, it’s hard to put rubber to the road,” he admits. “You’re dealing with hospital visits and marriages falling apart and teenagers getting in trouble at school. You’ve got single moms trying to pay the bills and they need help with their kids. Then you’re trying to have a family of your own. [Jenkins and his wife have three foster children in addition to their own two children.]

“You want the church to be missional, but it’s overwhelming.”

Yet Jenkins and his flock couldn’t ignore God’s call to the nations. Unity has become one of hundreds of churches and entities to act on their commitment to embrace an unengaged, unreached people group.

Before, “We liked to talk like we were a church on mission, but we really knew it was just a show,” he told listeners during the IMB program. “We were more concerned with what was going on inside the four walls [of the church] instead of out.” After Unity’s first trip to the Sahara in 2010, their whole outlook began to change — beginning with Jenkins himself.

“God kind of slapped me around a little bit” on that trip, he reflects. “I was getting comfortable as a pastor. I was getting comfortable doing American ministry. … I saw people, thousands of miles away, that are going through things I could never imagine going through, and they have no one in their life sharing with them that God cares. … How in the world are they going to know it unless we’re out there with our hearts, pouring ’em out, with our hands, getting ’em dirty, and with our voices telling people about the Good News of Jesus Christ?”

That first journey — and three more since — have changed priorities at Unity. Some members are selling cars and taking second jobs, even planning for early retirement, to get involved in the Sahara mission, according to Jenkins. “And what we’ve learned on the global side certainly has helped us on the local side” — whether it’s reaching out to public schools in Prince George or other ministries.

During his time at the SBC meeting, Jenkins had the chance to share his experience with other pastors, both as a participant in the IMB presentation and in one-on-one conversations around IMB’s “prayer tent” exhibit.

“To be mobilizing others when we’re just getting mobilized, it helps you see the work that God is doing,” he says. “But I feel like a cat in water, too. I dove in and here I am trying to help other people. Sure, we’ve sent four teams, but I’m not ignorant enough to think that we’re an engaging church just because we’ve sent four teams. We’re still learning about our people, what our platform is and how we’re going to raise money for the next 10 or 20 years to do this thing.

“But I want to help churches see that this is not just for mega-churches. You don’t have to have a thousand people in your sanctuary on Sunday morning to be able to adopt an unengaged, unreached people group. If you’ve got 80 people in your church, adopt that people group, be as loud about ’em as you can, find other churches of 80 members to team up with, and you might have a thousand people reaching out to that group one day. It’s for all of us. It doesn’t matter our size; it doesn’t matter our race. … That’s who God has called — the local church.”

The first step, he adds, is to take a first step:

“Start praying for a people group. Start researching and learning about them. It’s amazing what God does in your heart as a pastor and the heart of your congregation as they start to literally embrace a people group, not just on paper. Their heart starts to get wrapped around these people and they start seeing a God-sized call and a God-sized task in reaching them. I came [to the SBC meeting] to talk to pastors and see churches get fired up.”

And its pastor’s heart. 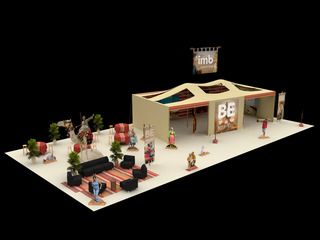 
Don’t just do something; stand there.

Better yet, kneel there. Be there.

It’s easy to switch the verbs in the old, accusatory challenge to do something — anything — rather than stand around. Lots of preachers, speakers and writers invert the familiar phrase to encourage us to slow down and be still. But it’s hard for us action-oriented Americans to stop and just be. Inaction, even for a moment, seems lazy, unproductive, even weird. We should be multitasking.

Yet stillness is where we meet God. To be His heart, His hands and His voice — the International Mission Board’s overarching theme for 2012 — we must lay aside the sound and fury of our ceaseless activities, our personal priorities and our very selves to encounter Him. We need His heart to make a difference in the world; not our divided, selfish hearts. His hands do the healing, not our powerless hands. His voice cuts to the core of searching souls, not our meaningless chatter.

“… If anyone wants to come with Me, he must deny himself, take up his cross, and follow Me,” Jesus says. “For whoever wants to save his life will lose it, but whoever loses his life because of Me will find it” (Matthew 16:24, 25, HCSB).

There’s plenty of positive action cited in that statement: come, take up, follow, save. Before any of that can happen, however, first there’s a negative action, an “inaction,” so to speak: deny self.

If you’re planning to attend the annual Southern Baptist Convention meeting in New Orleans June 19-20, I recommend a visit to the IMB exhibit. This year it won’t be a media extravaganza or a place to socialize and pick up lots of free stuff. It will be, in essence, a tent — a place of prayer. There, you will find four stations where you will have the opportunity to deny yourself, to take up your cross, to follow Jesus and to lose your life for Him.

When you emerge, you’ll find visual representations of the thousands of people groups throughout the world who have yet to hear the name of Jesus, much less His loving offer of salvation. They wait for someone with God’s heart, hands and voice to come to them with the joyful news. He longs to send someone. Maybe you are that someone.

But you need to spend time in the tent first — whether it be a physical place or an inner one — to become one with God.

Stop. Listen. Know. Be. Only then can you act in obedience — no matter the cost. Only then will you know His power.

Posted by Erich Bridges at 10:59 AM No comments: