Knocking at the gate at Christmas 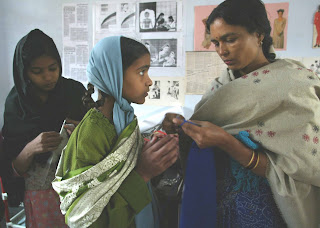 We do it as individuals, as families and as a nation. Let the world take care of itself for a while, we say. We’ve got to worry about home base until things improve. Enough already with endless global crises, foreign wars, etc. Let us have a quiet, peaceful Christmas for a change.

If only the world were so accommodating.

Trotsky’s grim observation was cited recently by The Economist magazine in an analysis of the many overseas challenges faced by President-elect Obama.

Case in point: the November terror attacks on Mumbai, India.

The Mumbai massacres weren’t just another blip on the global chaos meter. They illustrate once again the power of a small but well-organized band of murderers not only to kill innocents and paralyze a city, but to spark dangerous international confrontation. The threat of war between India and Pakistan, both nuclear powers, serves the interests of no one — except terrorist organizations seeking to destabilize the region.

The United States and other world powers simply cannot ignore that kind of crisis. So they respond to try to calm tensions and avert far greater violence.

In the personal and spiritual realms, however, it’s easier to look away when people are in crisis. I’m an expert at being (or pretending to be) clueless about the needs of folks all around me. You can’t help everybody, right?

“I think one human tendency resulting from the fall of man is to protect oneself from being consumed by the needs of others,” says a missionary serving in one of the poorest, most violent and least-evangelized countries of Central Asia. “I’ve found that fear within and fought it many times in pursuit of love.”

When things get tough, she asks, “Does God give me a ‘Holy Bible for Chaotic Times’ that directs me to give only to family and treat people the best they should reasonably expect me to under the circumstances?

“Or can He still be telling me, ‘Give to everyone who asks of you’?”

She avoided these uncomfortable questions more easily in the United States, where whole communities prohibit “soliciting,” where donations for the faceless needy can be dropped in offering plates and collection boxes. In the Muslim nation where she works, the poor are everywhere. Giving alms is expected, but the socially acceptable gift is a tiny amount. If you give more, you will be inundated with constant pleas for help.

All very reasonable — until someone comes to you needing more.

Such a one came to her last year: a desperately poor grandmother pleading for help to care for her orphaned grandchildren. The missionary did what she could and wondered guiltily during a visit home to the United States if the old woman and her grandchildren survived an especially hard winter.

“Maybe I did what I could instead of doing what Jesus could,” she admits. “I was unwilling to love extravagantly for Jesus and excused myself with ‘culture stress.’”

The missionary returned to Central Asia this year. The old woman found her again, with the same plea for help. The uncomfortable questions within returned.

“How would Jesus have me ‘Give to everyone who asks of you’?” she asks herself.

“If I had been used all of my life, yet blessed with children and grandchildren, and yet have their orphaned care fall upon my bent back and their little bodies draw close against my thin, bony frame and into my tattered [cloak], and if I saw their dark eyes in smudged faces looking wearily into my emptiness, and if I knew there was a person with great resources living on a certain street in a courtyard behind a certain gate, might I hope that person would charitably give me more than a [five-cent] coin?

“And if I, standing inside the courtyard gate, knew that the Father loved this beggar woman since eternity and accomplished salvation for her and her loved ones and longed to enfold her in His love this very moment, what might the love of Christ do through me?”

This same beggar woman is standing at your gate and knocking at your door. Not literally, perhaps, but she is there. Whole nations and peoples are there, pleading not just for food but for the Bread of life, the Word of God made flesh.

“What child is this?” they are asking. “Could He give us hope, too?”

Yes, it’s easier to ignore the insistent knocking, to pretend they aren’t there. But when the missionary in Central Asia feels overwhelmed, she turns to Jesus.

“I consider Him and think, ‘Jesus, You love me and I love You. That’s all I know for sure.’ Then He seems to put His arms around my shoulders, smile and keep walking.

“I want to be able to look back on these days with a smile that I got from Him.”


Posted by Erich Bridges at 2:36 PM No comments:

The hunger for story 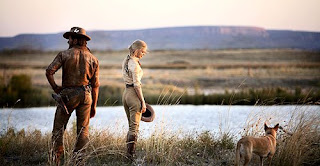 The epic – and I mean epic – movie starring Nicole Kidman and Hugh Jackman is easily two and a half hours long. You’ll faint from hunger unless you lug a giant tub of popcorn into the theater with you.

“Australia” director Baz Luhrmann calls big, sweeping dramas like his film "banquets of cinema." But “Australia” is more like a strip-mall buffet restaurant of cinema: mounds of reheated, generic glop and none of it fully satisfying. The film tries to be a drama/adventure/comedy
/Western/love story/hero vs. villian/historical pageant. Oh, and also an expose' of white Australia’s many sins against the continent’s Aboriginal peoples. It doesn’t quite succeed in any of those genres.

Still, I enjoyed it. In a world of “Saw V” and moronic computerized cartoons, I’m thankful for any movie that attempts to tell a dramatic human story – and takes right and wrong semi-seriously.

“Australia” deliberately hearkens back to the kind of filmmakers and films (think David Lean and "Lawrence of Arabia" or John Ford and "The Searchers") that gave cinema its bigger-than-life scale. The kind of epics that few directors or studios even try for anymore … .
[Baz] Luhrmann believes passionately that audiences still crave the epic. "The way the world is at the moment and the feeling of great fear and trepidation, there is a function for cinema to allow people to pull into a world and really feel direct, hard-core emotions," Luhrmann said….
Film historian Joseph McBride remembers a conversation he once had with "Lawrence" star Peter O'Toole about what made Lean's epics so memorable. O'Toole told him "that the secret of David Lean's success with epics is that they were almost intimate personal stories where it was about a small group of people that you deeply cared about and got to know well.
"But they stood for something larger. They were part of a large event. That is what makes an epic -- it focuses on certain people, but they represent all of society or a big part of society."
Epics, of course, have been around as long as there has been storytelling -- "Gilgamesh" and Homer's "Iliad" and "Odyssey," for example. Cinema has embraced the epic genre dating to the Italian 1912 version of "Quo Vadis" D.W. Griffith's 1915 Civil War tale, "The Birth of a Nation," was the first real American cinematic epic ….
[Filmmaker Ed] Zwick believes there are several factors as to why Hollywood has been shying away from traditional epics, including an "unwillingness to be embarrassed about certain kind of themes" ….
Despite the plethora of special-effects movies, film historian Leonard Maltin agrees that audiences still want to be swept away on a tide of emotions."The enormous success of 'Titanic' proves that audiences' tastes for epics have not vanished," he said. "Even in this hip, postmodern era, I don't think audiences have changed that much. I think filmmakers are more cynical than audiences."
Amen to that. People are hungry – as they always have been – not just for something larger than their own lives, but for meaning, for story.

The greatest epic of them all is the story of God’s quiet but dramatic personal entrance into human history.

The Christmas story.
Posted by Erich Bridges at 7:18 PM No comments: